as you probably know, second life is one of the most famous virtual communities of today. and as i wrote some time ago, there is also an evolving virtual economy which significantly affects real life businesses. therefore many well known companies (i.e. adidas, toyota, sony and ibm) started a virtual counterpart.

but the last thing i expected was that the company i work for gets to second life as well, because i could’t really think of a useful application. but an email, which reached me today, quickly disabused me. now there is also a quite impressing equivalent of the deutsche post in second life 🙂

you can send a post card of your avatar’s face or some other theme via second life to a real world address. i don’t know if this is really useful, but it’s a quite cool idea 😉 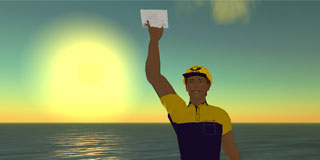